Mihaela Gligor studied Philosophy at Babeș-Bolyai University Cluj-Napoca, where she also received her PhD in Philosophy (2006) with a thesis about Mircea Eliade and Romanian Right Extreme. Dr. Habil. in History (2016), with a thesis entitled An Alternative Intellectual History of Mircea Eliade’s Myth. In the present, she is Scientific Researcher in the field of Philosophy at Romanian Academy, “George Barițiu” History Institute, Cluj-Napoca, Department of Humanities; Director of Cluj Center for Indian Studies, and member of Doctoral School on International Relations and Security Studies from Babes-Bolyai University Cluj-Napoca. In 2009 she was a Fellow at Department of Philosophy, Jadavpur University Calcutta (Kolkata), India, with an ICCR Postdoctoral Scholarship.  Recipient of VIRA 2017 Research Award: Outstanding Scientist in Humanities 2017 (History and Philosophy). Editor-in-chief of Romanian Journal of Indian Studies (Cluj University Press).

Daria Ioan completed her PhD in Theater (2012) at Babeş-Bolyai University, Cluj-Napoca. Her research is focused on photography, cinematography, performing arts, multimedia. Between 2006-2008 she studied at Ecole Normale Supérieure in Paris, and in 2007 she finished a Master on Theater Studies and Performing Arts at  Sorbonne Nouvelle-Paris 3, with Professor Jean-Pierre Sarrazac.  Since 2008 she has been teaching courses on photography at Babeş-Bolyai University, Faculty of Theater and Film.  She is the author of photography exhibitions like Karma Gokarna (May 2018), One frame One story (March 2015), and she participated in various international photography and digital art exhibitions. She published extensively on Theater studies, and she translated various theater plays from Norwegian to Romanian, two of them being staged by Mihai Maniutiu: The Man with the Guitar (2014), and Rambuku (UNITER prize for the best theater show in 2017).

Maria-Daniela Pomohaci graduated the Faculty of History within the University of Bucharest with a BA thesis on the political and religious evolution of the caste system in India. During her undergraduate studies she was offered 1 year scholarship to study history at Alpen-Adria Universität in Klagenfurt, Austria. Later, she continued her studies with a Master in the field of Sociology at the UNESCO Department for the Study of Intercultural and Interreligioius Exchanges (University of Bucharest). At the moment, she is preparing her PhD in Modern Indian Studies at Georg-August Universität Göttingen, in Germany.

Raluca Boboc holds a B.A. in Foreign Languages and an M.A. in Jewish Studies and has recently received her Ph.D in History from The University of Bucharest defending a thesis on the philosophy and anthropology of the body in the religious field. Fostering an interest in the history and anthropology of religion, gnosis and dualism, she is forever revisiting India and the Orient by articles and photography albums. 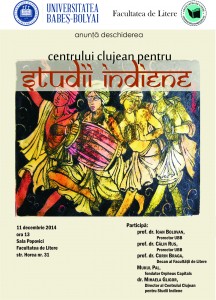